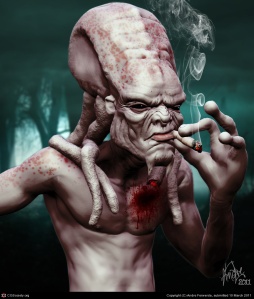 The modern phenomena of UFOria: Euphoria + UFO started on July 2, 1947 with a crashed space ship on a ranch near Roswell, New Mexico.

Happy #Roswell #UFO Anniversary. July 2, 1947, a UFO crashed down. My bro in law had a sales territory in Roswell. Locals said the undertaker was told to bring 3 child size coffins to the air base. Who u believe? My 3rd hand info or the Government? Weather ballon my ass! #laiens pic.twitter.com/MWZY3V6FTB

2. After I retired from doing Radioactive interviews on KRCL, I needed a new time suck away from Progressive politics.

That led to my 10 year bromance with this guy and Ancient Aliens TV show on the History Channel.

As an Assyrian-American, I knew full well who Marduk, Ishtar and Anu were. In my benighted state, I just thought they were mythic gods of Assyria, Babylon and Sumer (Shinar in the Bible).

Oh, but no! They were Sky Gods and Space Travellers who invented mankind to mine gold, sleep with Earth women and then tried to get rid of us noisy humans, their creation, with a massive flood.

Ancient Astronaut Theory about these Sky Gods aka Anunnaki – Those whom came from the sky. All those stories  of the Bible and quite a bit of Greek mythology derived from each Anunna (Anunna singular; Anunnaki plural).

And all those UFO encounters in the Bible!

Flying Saucers of the Old Testament

Lot’s wife was turned into a pillar of smoke, not salt. From a nuclear attack on the Sinai when the Anunakki unleashed a hellish civil war that destroyed Sumer/Shinar in a “bitter wind”.

So I start to do what I always do: comb through the Smile Jamaica Ark-Ives looking for Reggae and other songs devoted to UFOs.

And last year, near the Roswell crash anniversary in early July, I lead off with the theme from 2001 Space Odyssey, the Kubrick film, and juggled about 40 Space Oddities. Most Reggae/Dubbish. Some not. Today as well.

Last year, my bredrin Mike was in a coffee shop. He over heard the baristas talking: “I don’t know what Robert was doing on Smile Jamaica. It was more about UFOs than Reggae.”

Is that good? Is that bad? Yes!

Either way, it makes you think about radio. You don’t get stories from Pandora or Itunes.

And that is why I do it for 30 years. To make you think even if it is out there on the perimeter where are there are no stars. And we is Stoned Immaculate……

<What Aliens are “probing” for…> 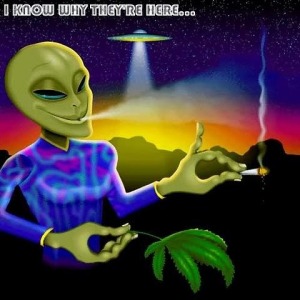 <Jah’s Wrath and the Challenger Disaster>

<Aliens gonna whip you, and put you in your rightful place; 13 sec.>

Set 6: Aliens in the Bible

Everyone have a good time getting innocent children hooked on High Fructose Corn Syrup? Tsk, tsk. Definitely NOT  Ital or Vital

Did any of you folks stream the 12 hours of Jah-loween tunes I gave you? Mutant Dub and Roots Reggae Mixcloud Only shows without me talking. Spooky tunes, horror bytes and movie trailers.  Plus 2013 and 2014 KRCL Live Smile Jamaica Monster Hash. Good any time of year!

So check it! I had zero trick or treaters Friday. I must be that house on the block. Too many voodoo sounds and smells emanating from the bowels of the Smile Jamaica Ark-Ives.

<That House on the Block: The Smile Jamaica Ark-Ives; 14 sec.>

When I was a youth in Montana, Halloween was definitely not as ideal as it is in Utah. Usually you had to walk on snow or have your winter jacket on over your costume.

And you better not give me and my hoodlum friends candy corn or raisins. If you gave out crap candy, you could expect an egg splat on your picture window! Fiya bun candy corn! Fiya bun raisins or nickels! Gimme the fructose corn poison. Droooollllll…..

I have seen too many negative polls and only one outlier pro pot result that seemed too good to be true, so it seems suspect. 52% No to 48% Yes, but if millennials don’t show up for the midterm vote it will fall short. Should have waited until 2016 with more robust youth and libertarian turn out. Hope I’m wrong!

2. Jah-regon: Measure 91. Legalization a la Collie-rado and Washington State. Smile Jamaica says: Most likely going to win. Latest polls are encouraging because of the gap between Yes (52%) and No (41%). Could be hurt if disaffected millennials don’t turn up for the midterm vote. Looks promising but not a lock per DC.

3. Washington DC: Not full legalization as in #1 and #2 but you can possess up to 2 ounces of cured bud and be able to grow six plants. Huge YES. Will probably cross over 60% yes. But it’s gonna be a nightmare.

So much of surrounding DC is federal jurisdiction. You don’t want to get busted with a stalk of sensi on Fedland. You’re gonna be under Heavy Manners. Plus in a likely ascendant Republican Congress, DC is going to probably face Congressional roadblocks to any semi-legal implementation.

4. Guam: Joaquin (KC) Concepcion II Compassionate Cannabis Use Act of 2013. Medical Marijuana and the creation of legal dispensaries.  Vote would ratify the legislation. Smile Jamaica says: I can’t find any reliable polls but its dependency to Federal jurisdiction makes any implementation difficult.

5. Florida. Amendment 2. Medical Marijuana. Smile Jamaica says: No Chance. Needs 60% to pass. Peaked at 57% and has been trending further down.

Non-statewide, local/county  jurisdiction votes Tuesday: Michigan (12 cities), Maine (2 cites), New Mexico (2 counties). Plus something a gwaan in Jah-suchusetts district which I was too foggy to understand. 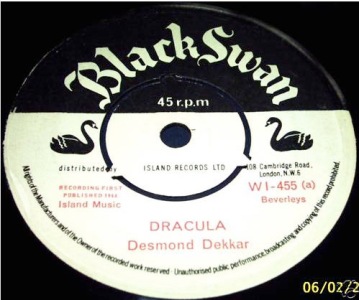