Here’s hoping you had a pandemically correct 4th of July. It’s okay to be paranoid, they are watching  if you didn’t!

Do you know what else happened around the 4th of July? 1947? The Alien crash at Roswell, New Mexico.

Roswell is the air field that delivered the atomic bombs that destroyed Jah-pon. Created at Los Alamos in New Mexico. Do you think it is a coincidence that the ground zero for nuclear weaponry was “probed” (pun intended) by extra terrestrial watchers?

Sometime in late June 1947 a ranch foreman in the rural scrub land around the Roswell Army Air Field, named Brazel collected debris, that was non-earth metals in origin.  Ultimately, he delivered the pieces to the Army.

On July 8, 1947 the local paper, the Roswell Record, published a statement from the Army…. 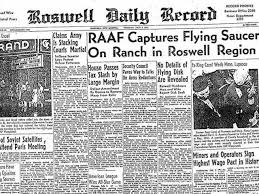 The many rumors regarding the flying disc became a reality yesterday when the intelligence office of the 509th Bomb group of the Eighth Air Force, Roswell Army Air Field, was fortunate enough to gain possession of a disc through the cooperation of one of the local ranchers and the sheriff’s office of Chaves County. The flying object landed on a ranch near Roswell sometime last week. Not having phone facilities, the rancher stored the disc until such time as he was able to contact the sheriff’s office, who in turn notified Maj. Jesse A. Marcel of the 509th Bomb Group Intelligence Office. Action was immediately taken and the disc was picked up at the rancher’s home.

Alas, it couldn’t be…

The higher ups in the military back in DC freaked out. They issued a weak sauce retraction. Jesse Marcel, the local intelligence officer assigned to the Roswell Army Air Field had to issue a mea culpa. It wasn’t flying disc. It was a  “weather balloon.”

Marcel’s family says that he was threatened to comply even though he knew it was not a weather balloon but a crashed spaceship.

He is holding a “piece” of the “balloon” as he bleats “weather balloon to the press.” Look at his eyes. He is not looking at the camera, but off camera. Regurgitating something he didn’t believe to please his superior officers.

If you read this blog, your take on what I ‘n’ I says next comes down to the Manichean choice. Do you believe Wikipedia or your Ace From Outer Space, Bobbylon the Ancient Astronaut Theorist?

My brother in law used to sell high tech pipe to irrigation and water conservation clients in Roswell. One day he took his client to lunch and asked, “So what’s the deal with the UFO’s”.

His customer, a ranch supply distributor, salt of the earth Southwest cowboy said outright. “The local coroner was told by the Army to deliver 3 child size coffins to the base. Why do you need coffins for a weather balloon?”

If you don’t trust I ‘n’ I do you trust Dwight Eisenhower. (He signed a treaty with the aliens. They can surveill us and we get their technology.)In 1954 Pres.  Eisenhower went to play golf and developed a “tooth crisis” instead. He disappeared from Secret Service protection. Why?

He went up into a flying saucer to negotiate the treaty

Don’t like Ike? How about Tricky Dick? Nixon showed entertainer Jackie Gleason alien cadavers in cold storage at an Air Force base in Florida. Gleason had the world’s biggest UFO collection at the time, but seeing the reality of the alien corpses haunted him.

How best to spread the truth of Ancient Astronaut Theory to the benighted masses? Via Reggae, Dub and Ska! Mutant Dub I-specially for the UFO mood!

<Alien fascination that rules the nation!>

I ‘n’ I favorite Smile Jamaica theme shows for 3 plus decades?

Here is how I ‘n’ I celebrate the UFO-ria 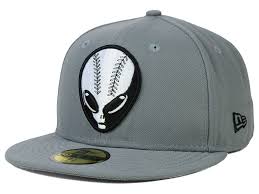 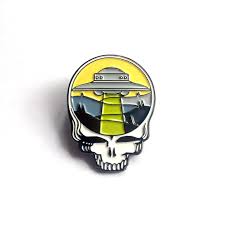 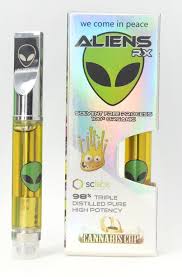 Because,  truly. They came for the nukes, but stay for the weed!

So enjoy the Extra Terrestrial mash up of Reggae, Ska, Rock Steady, Rock, Dub, Mutant Dub and even some Classical.

Stories on Ancient Astronaut Theory, Aliens in the Bible/Anunnaki Tales and famous men and mammals in space.

Look to the skies! Do not Scoff!

<Gilgamesh, immortality and the serpent; 56 sec.>

As part of the Epic of Gilgamesh, Gil was half mortal/half immortal. He sought out Utnapishtim on his tesseract spaceship. Utnapushtim gave him the Tree of Life. Immortality secured, an exhausted Gilgamesh returned to Sumer (Shinar in the Bible) and fell asleep on a river bank.

The treacherous serpent slithered out of the reeds and stole away the Tree of Life (Eden). Gilgamesh died a mortal. As did Adam and Eve after their encounter with the snake.

In Revelation, John the Revelator mentions the New Jerusalem. But he isn’t describing a city. It is a massive spaceship 1400 miles x 1400 miles:

Revelation 21:2 – I saw the Holy City, the New Jerusalem, coming down out of heaven from God, prepared as a bride beautifully dressed for her husband

Coming down out of heaven, prepared as a bride beautifully dressed. The jeweled dressing are the lights on the spaceship.

<New Jerusalem from the Book of Revelation is a spaceship>

The Anunnaki – Those who camr down from the sky. The Ancient Sumerian Skygods: Anu, Marduk, Enki, Ishtar, Enlil and more. They created mankind to mine gold and travel in from the Planet Nibiru. My fellow Ancient Astronaut, Rasta bredrin, Tena Stelin does the roll call of all of Biblical stories of Ancient Aliens.

Please tell me: what is the meaning?
The meaning of these sightings?
So many people claim to see the same thing
I guess it must mean something

Talking about Extra Terrestrials!
Ask yourself: is it real or is it impossible? Watch out!

I’ve got to wonder if he was for real?
Was he just a raving lunatic? Hallelu-Jah!

Enoch walked with God
And he was found not

Elijah was taken up into a Chariot
A Chariot of Fire!

Inna Ancient Mesopotamia
They talked about the Anunnaki
They said they came from beyond the Sky
Oh tell me! Was they telling a lie?

These are the Biblical, Islamic and Hindu examples of Ancient Astronaut Encounters: 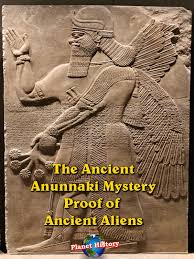 Sister Carol warns of the hubris of mankind treading on Jah’s Heavenly abode. The Challenger Space Shuttle crash was the comeuppance for human technological arrogance.

Before man could venture into space, mammals had to go first. The Soviets had Laika the space dog. Burned up within hours of flight on Sputnik 2. 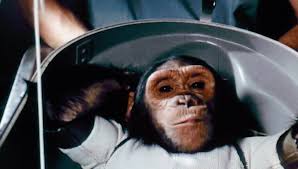 As the Rastas would say when I ‘n’ I was a youth learning Reggae music circa Fall ’86:

Maybe so, but I owe it all to the man…..I’ll explain below

Always been a huge music fan and collector since growing up in Fort Benton Montana (mid 70’s-mid 80’s). When I came to the University of Utah in Fall of ’86, I brought with me a couple crates of indispensable vinyl and a couple boxes of these shiny aluminum coated novelties called the Compact Disk.

Back in 1986, when the compact disk market was so new, there wasn’t a lot of contemporary titles available yet. You had to seek them out. In the dorms,I met a Jewish kid from Baltimore, MD named Neil Cooperman. Physics Major. (Me? Middle East Studies).

He and I were loaning out our rare finds like trading baseball cards. Think of the mid 80’s. Too much MTV synthesizer. All the rock acts from  the 70’s: Rolling Stones, Dylan, The Who, etc. were issuing pretty crappy records. Even my favorite punkers like The Ramones and The Clash had fallen on hard times.

Like most college kids, I was into college rock:  My Big Three: The Replacements, Husker Du, The Minutemen. When D. Boon of the Minutemen died in a car crash, that was the musical low point in my musical consumption for traditional rock.

I ‘n’ I was finally living in a city with a plethora of record stores. (90% gone now in Salt Lake City). With all that choice in an emerging CD market, where was I gonna go musically as I built my collection?

And then the epiphany moment. Neil played for me a disk by a group named Black Uhuru. (Uhuru – Swahili for freedom).

And the Riddim Twins in the back, Sly & Robbie controlling the scene.

1983 sound of them working with Bob Dylan and Grace Jones. They were the drum and bass standouts in an synthesized sound that was 80’s rock. (Mostly bad, but Sly Dunbar (drums) & Robbie Shakespeare (bassie) were the best of the bombast.

The dorms at the U of U were concrete bunkers. You probably had bigger closets in your home.  Within 30 seconds of the lead off track, What Is Life?, that synth bass and vocoder vox ricocheted and throbbed throughout the room. I ‘n’ I didn’t burn the hippie lettuce then, (Eff you Ronnie Raygun!), but that CD lit the fuse.

That was what I came to Utah to find. A new sound. Reggae music.

Enter Ronald Reagan. I’n’ I said I lived at my Grandmother’s house to qualify for student loans and grants. My first two years of U of U (even with out of state tuition the first year) was paid for in Pell Grants and loans. The grants paid for room, board and tuition. The loans went for my Reggae collection.

Used vinyl was cheap. People were selling vinyl to buy CDs which were rare and ridiculously expensive. I hoovered up both formats.

My last year at Montana State University in Bozeman, Montana, I discovered their college radio station, KGLT. Very similar to KRCL. Free form format, mix of college rock and community shows like bluegrass, folk, Sunday gospel. Loved it much more than the noise of commercial radio.

I ‘n’ I assumed that the Univ. of Utah radio station, KUER, would be the same. WTF is NPR? Why is a college station playing classical music?

One of the student leaders recognized this and tried to re-boot a failed college managed “radio” station that would be broadcast from the Student Union to patrons in the cafe and study tables.

It was (and is) called K-UTE. I jumped at the chance to spin disks. I did a volunteer Reggae show called Positive Vibrations (after the Bob tune.) Spring of 1987. Pure amateur setup, but fun none the less.

A year later my friend and I were in the Pie Pizzeria and heard them call out for volunteers on the community radio station, KRCL. It was not college managed. I had been listening to them, when someone told me about Smile Jamaica.

They were looking for a late night show featuring a mix of Reggae with World and Ska. I ‘n’ I submitted a proposal and was trained Spring of 1988. First show as the last Sunday Night/Monday Morning in June. 3-6 AM.

I ‘n’ I called it 3 o’clock Roadblock – from Marley’s Rebel Music. Now I had an outlet for my Reggae collection. Even if the only listeners were cab drivers, 7-11 workers and insomniacs.

Learned the ropes. Made all my mistakes, Tried to find an on-air announcing sound that wasn’t horribly monotonous and filled with ands and ums. Great year of apprenticeship before I ‘n’ I moved over to Smile Jamaica, October 1989.

That’s a story for another day.

Thanks for listening for 1 week or nearly 1/3 of a century!

Barbara Paige – Babylon Must Fall; Hear Me Now (Epiphany) ‘82 US

Eek a Mousse – Hitler; Mouse and the Man (Greensleeves) ‘82 UK