The best writing and publishing in Utah happens to be by SLUG magazine. I have been reading them since back in the 80s when they featured “Serial Killer of the Month”.

About 5 years ago, this esteemed publication chose to interview yours truly about the 420 phenomenon.

Wikipedia more or less confirms my notion that 420 wasn’t cop code or #s of chemical but more likely school lets out at 3:20 and the set meeting time was an hour later. Time to run home, grab your gear, hit the Sev and meet up to have a session in the garage or basement. Mission accomplished: take a hit of Visine and be home before Ma and Pa left the office at 5pm.

High Times, of course, memorialized the group of kids in San Rafael, Collie-fornya, who originally crafted the phrase and smoker’s “happyer hour” as far back as 1971. (San Rafael, near to one of my favorite Bay Area record stores that gave up the ghost in the digital music era: Mill Valley’s Village Music. Sigh.)

40 plus years later, here we are and April 20th is to weed heads what Presidents’ Day is for mattress sales. What better reason to get together for some “reasoning”?

And since 4/20 2014 falls on a Sunday, I imagine masses of people gathering after church for a day of passing the kutchie pon d’left hand side. The peak of partaking crescendos 20 minutes after 4pm. Done in time for 60 Minutes later that eve.

(Much like the mindset, “real men invade Iran”,  ardent Vipers start at 4:20 alright…AM!)

So with that in mind, what happens on any Holly-daze occasion? (Especially one that elicits the munchies.)

Too much of everything: Salty snacks, Busch Lite (as opposed to bush a-light), high fructose corn poison and whatever else is in Twinkies and those delicious fruit pies at the Sev.

Those cat vomit nachos look like a winning idea in a state of cannabliss. An hour later? Not so much.

All that kicking the gong around leads to smoker’s cough, sugar coma, chronic (pun not intended) red eye, cotton mouth and sore ribs. Those of you celebrating “early & often” on  420 pay a bit of a price the next morning on 4/21. Am I right? Can I get an Amen?

So the ace marketing team at the Smile Jamaica Ark-Ives has come up with a remedy to this shituation:

If I had a nickel for every time someone has told me that Obama should make 4/20 a National Holiday, I would be a…thousandaire.

Au contraire mon frère. Much like Superbowl Monday, you need the day after to recuperate.

So join us in the effort to make 4/21 a National Holiday. A day spent in recovery and reflection.

Look soon for this petition to wind its way through Change.org, MoveOn and the White House’s “We the People” petition website.

(Good luck on the last one from the most transparent Presidency never. NORML’s petition got over 70,000 signatures the most of any other submission. Hello? Hello? Is this thing on?

Obama’s toke on Cannabis legalization is a lot like my Dad’s take on drinking when I was a youth, “Do as I say, not as I do!”

Barring a Federal Holiday effort, have any of you ever “burned” a sick leave day on 4/21? Hmmm. 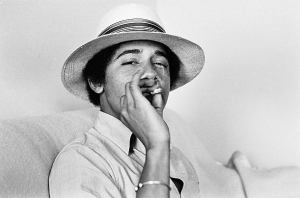