The prohibition against Cannabis is much like saying the earth is flat. There is absolutely no compelling reason to keep this plant illegal much less the stone age (no pun) sentences handed down for a lickle stalk o’sensi grooming in your pocket. (Black Uhuru)

I remember the T shirt from back in the Reagan “Just Say No” Era about the DEA: “One seed is all we need to make you bleed.”

WTF? When I did radio interviews at KRCL on their listener call in program, Radioactive,  I did several shows devoted to harm reduction and the cruelty and downright racism of the drug war.

You would have thought that all these baby boomers who lit up in the 60s would have come to fruition and at least decriminalized the Seven Leaf as they sunset into retirement. (I guess all of the politicians in Washington, DC were in their dorm rooms playing with their slide rules while all the other hippies were having fun and wasting their lives.)

Obama practically claims he invented hot boxing as a youth in Hawaii and now as a lame duck he won’t even reschedule Cannabis so it can be studied for the plant’s effects; good or bad. Lame indeed. In Reggae there is a saying, “Ask me no questions and I’ll tell you no lies”. 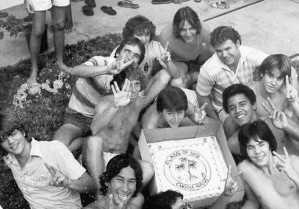 Every journey of a thousand miles begins with a single step. The unthinkable happened when Colorado and Washington legalized it in 2012 despite legislative hostility and veiled threats.

In fact Collie-rado made a nice score of 3.5 million on their 25% cut of the haul since Jan. 1. Crime didn’t go up. Tourism is increasing. Marijuana consumption and sales are going to become boringly routine. No more skulking about waiting for the man over an 8 track of schwag. You stop at the liquor store for a sixer or bottle of wine and then head to Weedmart for your smoke. How civilized.

Collie-rado and Washington succeeded, in large part, because they promoted Cannabis as safer than alcohol. Or, “let’s tax it and regulate it just like alcohol”.  In my opinion, those strategies are better because of their honest intent.

Citizens and politicians who don’t smoke want to think that responsible use will not come at a societal price. And local government entities, who have been slammed by the Great Recession, are looking for ways to fill the coffers now that the bubbles have burst. 15% excise tax and 10% sales tax are winning arguments.

The medical defense is more of a sticky wicket since so much of Cannabis health effects (or lack of harmful effects) are “conjecture”. Prohibition has made it so difficult for American universities and health agencies to actually conduct double blind studies. Incrementalism is fine but that grey area leaves casual users in limbo and seems to undermine the “intent” of the laws. It’s “medicinal” seems cynical and dishonest to non-users.

Legalization cuts the Gordian Knot and makes it easier to vote up or down on the merits of state regulation and clear cut rules of possession and consumption.

My Mom voted for Montana’s medical marijuana law. I asked her to vote for legalization if it comes up in 2014. She said, “If that’s the only way you will come home more often, I will vote yes.”

Here’s where I go for the Sensi Scorecard of: what’s up, polls, handicapping potential and anecdotal information.

Jon Walker of firedoglake.com writes a near daily posting called Just Say Now that will keep you informed of the progress of the Seven Leaf at the polls. Smile Jamaica approved!

If half of those states say yes (and the polling is looking good most everywhere; upper 40% and many states over 50%), legalization will be a regional phenomenon in the West, Mountain West and Northeast.

If California says yes, (the 8th largest economy in the world), the walls are gonna come tumbling down pretty much everywhere until we get a Federal Law. Selah!

My only fear is: what will the the total end of Cannabis prohibition do to the quality and quantity of my precious herbtunes?